Entering flow state whenever you want isn’t a practice left only for the mental fitness gurus, anyone can do it. And in this article we’ll tell you how, with a little editorial flavour for spice.

There are those times you might remember in your younger years when you’d be able to turn your headphones up, listen to some EDM, and get into the zone for whatever it was you were working on.

Whether it was crushing lines of code, drawing your nine thousandth illustration of Batman in a sketchbook, or having an above-average deep conversation at the lake with a girl you are really into.

There have been times in your life where everything connected; jokes didn’t fall flat, code worked the first time around, and research papers passed with flying colours.

And then it was gone.

That feeling of being in the zone was hard to achieve, rarely intentional, scarce, and even harder to repeat intentionally.

Where did it go?

What is Flow State?

Being “in the zone” as it is still commonly called, long before the Mihaly Csikszentmihalyis and Steven Kotlers of the world was how we’d describe an epic day where we accomplished a lot, the hands on the clock circled around without noticing, and everything generally felt easy.

Everyone knows the zone.

We know it from periods in our lives where we were likely more healthy –but what exactly we put into our bodies that day is harder to recall.

The circumstances that put us in the zone usually go a little like this; we were down to the wire on something, just uncomfortable enough for it to feel good, and our thoughts were a linear stream of epicness.

Today, the zone is recognized among Millennials as Flow State –and flow state is described by the man assuming credit for the concept today (there have been many and will be many more, just with different marketing) as “the state in which people are so involved in an activity that nothing else seems to matter”.

Let’s roll that quote back so I don’t seem too cynical;

“I developed a theory of optimal experience based on the concept of flow— the state in which people are so involved in an activity that nothing else seems to matter; the experience itself is so enjoyable that people will do it even at great cost, for the sheer sake of doing it” – Mihaly Csikszentmihalyi, Flow

I won’t be too critical of Mihaly beyond that, but it is incredibly important for you and everyone else to know that we all own Flow State. It’s a part of all of us; we can feel it. It’s like developing a theory of love. You can write it down all you want but you don’t know it until you feel it, and you certainly cannot put your name on it.

No marketing by it’s manic street preacher Steven Kotler or book by Mihalay can take flow state away from you. Some say it is a gift of God, or gods, and others a form of enlightenment from within –whatever your school of thought. You can find it between the pages of countless works or while you’re standing in the shower.

WIth that out of the way, let’s go a little further down the rabbit hole.

Why Flow is Important

Would it be a safe bet Einstein knew flow state? He sure had strange sleeping patterns he spoke of, to help him achieve greatness.

Flow state could help one make a better income to support their family. It could help a doctor perform a life-saving surgery.

The world is at a point where the odds are stacked against everything. And at the bottom of this presupposed “everything” are challenges that threaten our very existence.

Even if it’s the small stuff.

Flow state is more important than ever. The future of one thing and everything alike depend on more people finding it.

Do you think the shamans encouraging people with money and power to give Ayahuasca a try know flow state?

There’s more to flow than meets the eye. It’s only normal for folks to try and get right in front of that bus.

Flow is meaningfully important, depending on The Why of whoever you might ask on a given day.

How to Achieve Flow State

Yes folks, I will describe how to achieve flow state without the woo woo.

First I’ll describe my own experience, and then I’ll chase it with some points from the woo woo master of the day himself. I guess‘not being critical anymore’ flowed out the window.

Take Care of Your Health

The most boring point of all, but still important. I am a man, so this part is a wee bit geared to men; clean your house mentally, do things you say you’re going to do, focus on exercise that reboots your hormonal order (testosterone levels) and consider the importance of eating right.

Healthy fats, herbs for your mind, maybe even ketosis. But that’s for another article.

Don’t Fill Your Head with Garbage

One of the points I really like from the 17 Triggers of Flow State by Steven Kotler is where he describes close communication –focusing on the task at hand and uplifting the ideas and actions of others.

As in, thinking of witty things to say is superfluous and repugnant to The Flow –especially in a group scenario. Maybe expunging some pop culture from your diet might help.

Listen to Mihalay and Steven

Now we’re in Kotler land, full tilt. You see, the truth is I am still a fan of Flow. They’re bringing the concept to an entirely new generation, even if it’s a little wordier, politically correct, and sterile than I’d like.

So here’s some of my understanding of Steven and Mihalay. Some key points I really found helpful to take away from our article 17 Triggers of Flow State include;

I timed how long it took to write this article; 49 minutes and 12 seconds, with sources open in front of me and before editing the typos (there were 19, not bad).

I’m sitting in a sparsely furnished room in the middle of a jungle in the Philippines. My air conditioner hardly works, and it guzzles money. And my wife is waiting for me to finish this article so we can binge a full season of a show I’m too embarrassed to tell you the title of.

Risks, double check (how do I know this article will even pass the editor, it’s certainly a curve ball, and rewriting it means I lose time and money).

I swear to flow, I think we can both agree it would be really lame if I make all that up to make a point. I’m sure it happens. But not this guy, and in the least, not right now.

Anyone can achieve flow. And I hope this article helped make the concept a little more relatable for you.

It’s easy when you understand the material and own it. When you’re good at something, under a deadline, and just uncomfortable enough –and there we go; I’m describing “the zone” again.

Or whatever you want to call it. It’s yours to do so.

How do you achieve flow? Let everyone know in the comments. 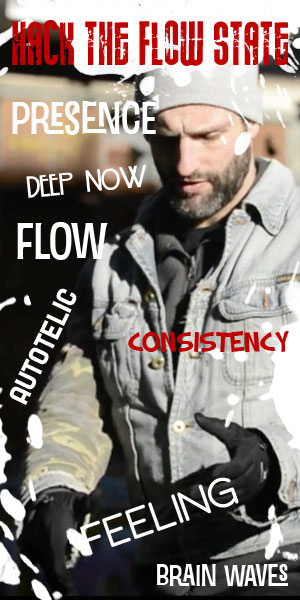